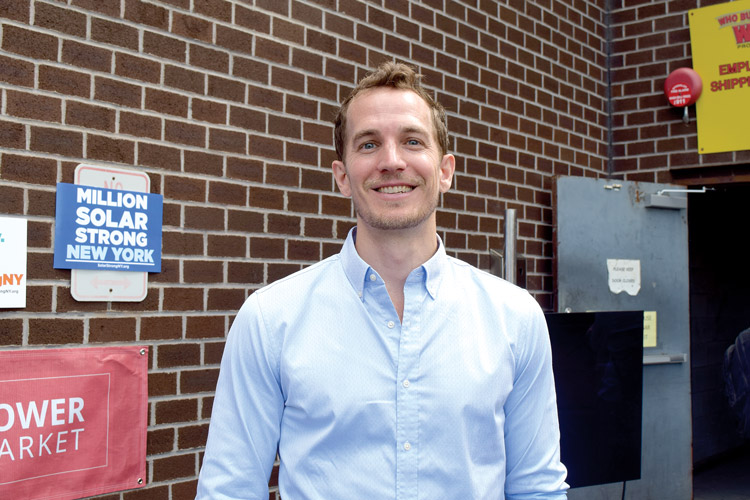 Story and photos by Gregg McQueen

The project is part of a movement known as “community solar,” which allows users to tap into energy from solar farms without installing panels on their own building.

The new installation, placed on the roof of a W.B. Mason warehouse at 1160 Commerce Avenue, features 3,000 solar panels that can power up to 145 homes.

It was created by OnForce Solar, a company that’s been ramping up community solar projects throughout the city. The Commerce Avenue solar farm is the third Bronx site OnForce Solar has opened since April.

He added that his company is employing Bronx residents to install the solar farms.

“It’s good for everyone, it’s coming back into the economy,” he said.

Díaz said the solar farms would help protect the environment and improve the health of borough residents, as the cleaner energy would help reduce asthma and respiratory illnesses.

“We want to make sure that as we move forward that we can have corporations and companies and businesses and development with not only solar panels but with more green equipment and energy,” he said.

The 3,000 panels make the farm the largest community solar project in the borough.

Díaz expressed support for the Million Solar Strong Campaign, a movement to increase the use of solar power in New York State, with the goal of powering one million New York households with solar energy by 2023.

Travis Tench, Director of Community Outreach at PowerMarket, touted community solar as a way for New York City apartment renters to participate in solar energy, as installing panels on buildings can be costly and typically can only be done by building or homeowners.

“By helping make projects like this one successful, we include all the people who wouldn’t otherwise have access to clean, locally produced electricity,” he stated. “And the way we get to a sustainable energy system and future is by including everyone.”

Tench said that the savings from community solar can assist low-income residents with paying energy bills.

According to a 2015 study by the U.S. Energy Information Administration, 31 percent of U.S. households reported facing a challenge in paying energy bills, or must decide between paying for energy or other essentials like food or medicine.

PowerMarket has partnered with OnForce Solar to do community outreach and help sign up residential customers.

Tench explained that signing up for community solar power is simple, with no equipment or enrollment fees required. However, subscribers must be Con Edison customers to participate.

“Signing up is just like signing up for cable or internet,” he remarked. “It’s all done online and you create an account.”

The solar farm supplies energy into Con Edison’s local power grid. Community solar subscribers pay Con Edison as they normally would, but receive a credit on each month’s bill for the solar power.

“There are few things that seem less under your control than your energy supply, but community solar projects like this one is a way that you can take things into your own hands,” said John Opperman, Executive Director at Earth Day Initiative. “By signing up for a project like this, you get to be part of the solution, and you save money.”