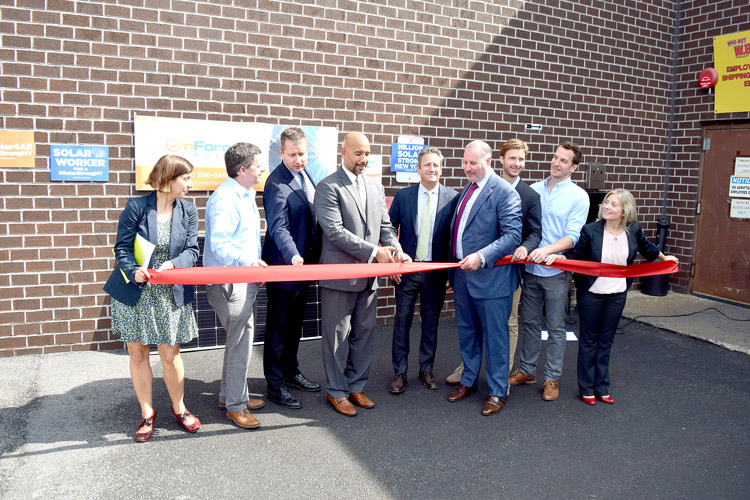 A major new community solar farm is offering the public energy savings on their utility bills.

Port Morris-based OnForce Solar cut a ribbon officially opening a 3,000 panel, 1.1 megawatt community solar farm atop 1160 Commerce Avenue that is one of several coming online in the borough allowing the public to sign up to receive power – and potentially reduce their electric bill.

The ceremony took place on Wednesday, September 19 and coincided with its campaign called Million Solar Strong that advocates for the goal of powering a million households, including 100,000 low income units, with solar power in New York state by 2023.

The community solar farms are being developed as part of an initiative from the New York Public Service Commission, said Brooke Ruggiero of OnForce Solar.

“Community solar farms are different in that several households, small businesses, schools, churches and renters are signing up to get energy,” said Ruggiero.

In the past, only residents who owned homes with roofs that were suitable to have solar panels on them could benefit from solar energy savings, but now Bronxites can sign up to receive a portion of the energy generated from the farms being developed around the borough, said Ruggiero.

Residents who are interested in becoming a subscriber to other OnForce Solar farms, which should be coming online in the next several months, can get more information and sign up at onforcesolar.com.

About 20% of the energy generated from such farms is set aside for low to moderate income ratepayers, including those who are renters, said Ruggiero.

Borough President Ruben Diaz Jr. was on hand for the ribbon cutting and has joined the Million Strong Campaign, along with other elected officials, industry and environmental leaders, and community organizations.

Diaz said that the ‘green economy’ is creating the jobs of the future and that it is important that New York be at the forefront of a shift to a ‘green-collar’ economy.

“As we move away from fossil fuels, we must be prepared to replace traditional fuels with cleaner, renewable energy sources like solar,” said Diaz, who added that with “smart planning and a true commitment at all levels of government, we can reach the goal of powering one million households with solar energy in the next five years.”

Councilman Ritchie Torres said in a statement that clean energy like solar power could mitigate the effects of climate change evidenced in more extreme weather and severe storms.

“Building enough solar to power a million homes here in New York by 2023 is a good first step,” stated Torres, adding that he has seen negative health outcomes in communities where there is a “dirty energy system.”


Aside from altruism, there are practical reasons to sign up to be a member of a community solar farm.

Subscribers receive a discount ranging from eight to 12 percent on their electric bill from OnForce Solar, depending on the duration of the subscription, said Ruggiero.